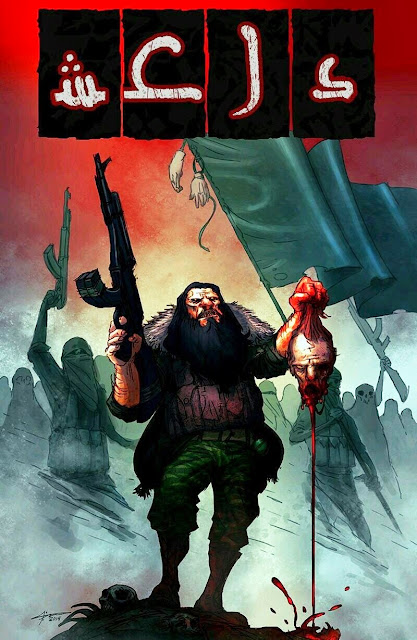 After the fighting broke out between the Lebanese Army and Daesh terrorists in north-east Lebanon, many said that it was the unavoidable consequence of Hezbollah’s involvement in the Syrian war. But as usual in Lebanon, others disagreed and said the opposite.

Before getting into a “chicken or egg” bickering, and before we decide whether it’s true or not, let’s have a closer look at the events preceding Daesh’s invasion attempt of north Lebanon.

Not so long ago, Daesh was presented to us by the world’s media as a small, extremely violent armed group called ISIS, composed of jihadists from around the globe, with the sole mission of fighting the Assad regime in Syria.

Suddenly, overnight, and to everyone’s surprise, this small armed group mutated into a powerful army, taking over large parts of Iraq and Syria, establishing a caliphate on Iraqi and Syrian territories. Territories united in one “Islamic State”, ruled by the self- proclaimed Caliph Ibrahim.

Soon after, ISIS started the “cleansing” of their Islamic State from all “undesirables”, Shias and Christians alike, in order to create a “pure” Sunni entity.

This is actually a very efficient and proven strategy: install such terror in people’s hearts and minds so they prefer to surrender or flee instead of resisting. This strategy is used to facilitate and speed up any invasion at a minimum cost in men and equipment for the invading forces.

How come such a accomplished strategy was used by a bunch of ignorant barbarians, as they are advertised in the media?

According to classified documents released by the former NSA contractor, Edward Snowden, Abu Bakr al-Baghdadi, the now infamous Caliph Ibrahim, was a CIA operative that undertook extensive military training at the hand of the Mossad, as well as “courses in theology and the art of public speech.”

Knowing that all previously leaked documents by Snowden were verified as accurate, we can only conclude that the information about Abu Bakr al-Baghdadi can’t be dismissed or ignored.

To further our résonnement, let’s add two simple and obvious facts:
1. A small armed group doesn’t simply mutate overnight into a powerful army. It requires meticulous planning, considerable training and a lot of money.
2. Daesh’s Islamic State, uniting chunks of Iraq and Syria, erases de facto the borders set by the Sykes-Picot agreement.
So, to summarize: an organized army of jihadists led by an alleged Mossad trained agent, was created, financed, armed, then sent to Syria and Iraq to create an “Islamic State”, erasing the official borders of these two countries.

Before we ask why and try to give a comprehensive answer, let’s go back in time. Let’s go back to 1954 and to the documented letter exchange between two Israeli Prime Ministers, David Ben Gurion and Moshe Sharett.

In these letters, Ben Gurion and Sharett talked of dividing the Middle East into small sectarian states. Ben Gurion wrote: “In normal times this would be almost impossible. (...) But at times of confusion, or revolution or civil war, things take on another aspect (...) If money is necessary, no amount of dollars should be spared (...) We must concentrate all our efforts on this issue.”
Moshe Sharett answered: “I don't exclude the possibility of accomplishing this goal in the wake of a wave of shocks that will sweep the Middle East (...) destroy the present constellations and form others.”

Isn’t it exactly what’s happening today in Syria and Iraq with Daesh and its “Islamic State”?

An exclusive Sunni Islamic State, can only encourage others: Shias, Alawites, Kurds, Christians, Druze, etc. to proclaim their own State, dividing the different Arab nations into small antagonist entities.

This sectarian states will mirror Israel’s Jewish state and justify its existence, allowing not only its survival and durability in the region, but also its economic and military predominance on all its neighbours.

The same strategy used in Syria and Iraq, is now applied in Lebanon. Creating an “independent Islamic State” in the north of the country will erase its Sykes-Picot borders and facilitate the break up of the Lebanese Republic into sectarian mini-states.

In the light of all this, debating if Daesh came to Lebanon because Hezbollah is fighting in Syria is ludicrous at best. Instead we should stop the petty accusations and finger pointing, and unite to defend Lebanon.

Because if we don’t, the last chance for Christians, Muslims and Jews, for Shias, Sunnis, Alawites and Druze to live together, will be gone forever. And so will Lebanon.


More on a similar topic :
- The "Daesh conspiracy": fact or fiction?
- How can the world respond to Daesh atrocities?