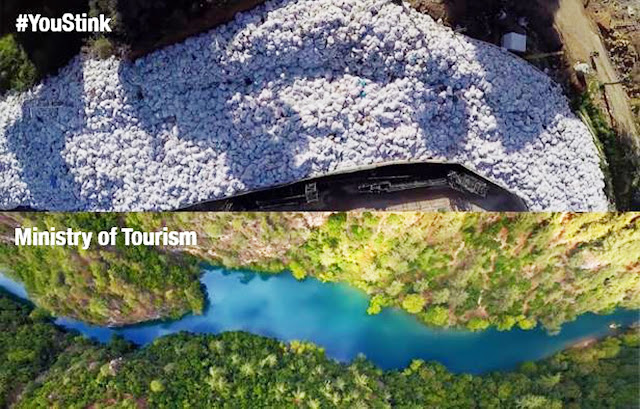 When you think you’ve seen it all, heard it all, in this absurd country of ours, something comes up that turns this belief upside down. So now the Ministry of Tourism wants to sue YouStink over a parody video showing the terrifying spectacle of garbage rotting everywhere!

“Lebanon's Tourism Ministry Tuesday threatened legal action against the You Stink activist group for using its logo in a mock video displaying stomach-churning scenes from the country's eight-month-long garbage crisis, writes The Daly Star. In a statement carried by the National News Agency, the ministry described the two-minute video as "offensive", saying it harmed Lebanon's image, and was in violation of the ministry's Intellectual Property Rights.”

So basically the eight-months-long garbage crisis the Lebanese government and the corrupt political establishment are responsible of is not offensive, it doesn't harm Lebanon's image, but the YouStink video does?

That’s a good one.

In other words, the Ministry of Tourism wants to sue reality. This arrogant smelly reality that has the nerve to be the complete opposite of what the Ministry wants it to be. Sounds like “1984” for dummies, doesn’t it?

What next? Sue the brown pollution dome over Beirut because it’s not the clear blue sky the Ministry’s ads are showing? Why stop there? Why not sue anyone who gets sick because of the viruses the tons of garbage are joyfully producing? All these people in such poor health are surely harming Lebanon’s image. Let’s hide them in some concentration camp, far from any potential tourist’s sensitive eyes!

One more thing, just in case the Ministry didn’t properly check with its lawyers: when you parody something you’re not liable for “violating Intellectual Property Rights”. That why it’s called a PARODY! If that wasn’t the case, shows like "Saturday Night Live" or "Les Guignols" would have ceased to exist a long time ago.

But, on the other hand, the Ministry of Tourism could be sued over its ads for “misleading and false advertising”: the way they portray Lebanon is so far from its actual reality, one could argue they’re aiming to con foreigners into coming to a country where they could catch a disease simply by breathing.


The original Ministry of Tourism ad: