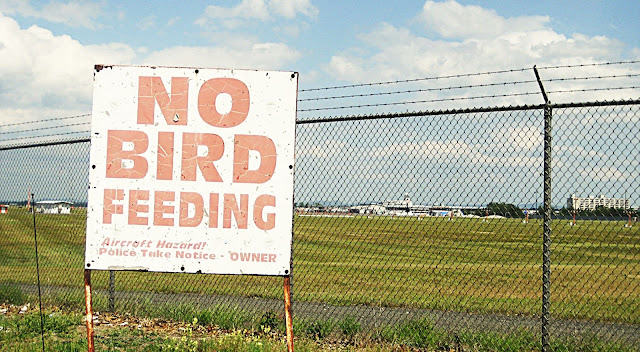 In most countries, you find signs like this one near airports. But what do these countries know? In Lebanon, we are smarter and stronger than everyone. And we prove it. Instead of sissy warnings, we make manly bold moves. To show that nothing frighten us, we open a garbage landfill right by Beirut’s airport. In other words: a giant free Lebanese restaurant for birds.

It makes sense: we love restaurants, we love birds (shooting them that is) and we love clapping when planes land. Put these three together and you get the Costa Brava landfill, right by Rafic Hariri International Airport.

What a brilliant idea! We boost bird tourism in Lebanon – do you know any bird anywhere in the world that wouldn’t fly to a giant free restaurant? We boost hunting tourism – so many birds flying around in one place is a hunter's dream come true, especially so close to the airport: no need for expensive hotels, you land, you shoot, you leave. The ad writes itself.

Before Costa Brava, the Lebanese used to clap when their plane landed in Beirut. But they did it for nothing, like idiots. Now they have a good reason. The plane approaches Beirut, starts its descent, would birds cloud the pilot’s vision, would they hit one of its engines, causing a crash? That’s real suspense! So when the plane safely hits the ground, you clap because it’s a miracle you get to live to tell the tale at the Sunday family lunch.

Now some people want to spoil all this fun by closing the Costa Brava landfill or by installing audio repellents at the airport, anything that would drive the birds away. That’s shocking. And it looks like another conspiracy against our beautiful country.

Not only we need to resist such conspiracy, but we need to create more opportunities like the Costa Brava landfill: raise men-eating sharks in children swimming pools, release crocodiles in all private beaches (I’m sure by then, they’d be no public beaches left), set up artificial avalanches on ski slopes, and, let’s dream a little, create a real life Jurassic Park where hungry dinosaurs would case cars on the Beirut-Jounieh highway during weekend traffic jams.